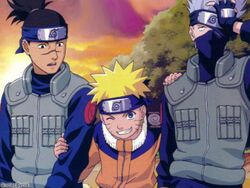 KakaIru (カカイル; KakaIru) is the term used to refer to the romantic relationship between Kakashi Hatake and Iruka Umino.

At the beginning of the series, when Naruto became Iruka's student, Iruka felt troubled to deal with him, due the fact that the monster responsible for his parents' death, the Kyubi, was sealed within Naruto. However, he was eventually disabused by the notion by Kakashi. Later when Iruka chased Naruto and protected him, Kakashi appeared to help them.

During the Pain's attack to Konoha, one of his Six Paths of Pain attacked Iruka and questioned Iruka about Naruto's location, which Iruka refused to answer, almost getting killed wasn't for Kakashi that appeared to help.

KakaIru has a fair amount of supporters and is especially popular in Japan. The two could be shipped due to them both being mentors of Naruto and how they look together.

Retrieved from "https://narutocouple.fandom.com/wiki/KakaIru?oldid=43220"
Community content is available under CC-BY-SA unless otherwise noted.